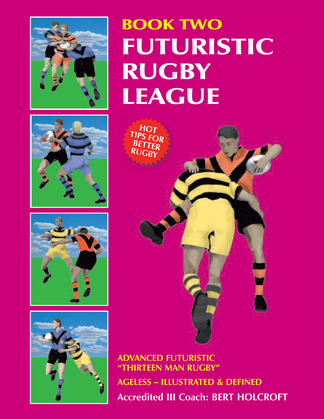 by Bert Holcroft (Author)
Buy for $3.99 Excerpt
Nonfiction Nature, recreation and sports Sports & recreation Rugby
warning_amber
One or more licenses for this book have been acquired by your organisation details

The Holcroft saga is a rugby story, the likes of which may never have been equaled in the history of the game.

It begins over a century ago, when Mr. George Holcroft was given charge of Leigh St. Peters RLFC in 1889.

He married, and when his family grew up, Jack, Harry, William, and Tom all played for local teams. They married, and George?s grandsons, Bert and Bill, also played.

Bert Holcroft has been a distinguished servant of the game of rugby all his life. He holds coaching certificates from both the Australian and British governing bodies?one of only a handful of men to achieve such an honor in the game?s history.

For twenty-odd years, Bert Holcroft has had one of the unlikeliest jobs in sports?teaching Australian rugby coaches how to coach!

Considering the Australian dominance of World Rugby in recent years, that might seem at par with taking coal to Newcastle.

But make no mistake, Bert Holcroft has done as much as anyone to ensure Australia?s reemergence as a major rugby power.

On the face of it, Australia wouldn?t seem to need any outside help, let alone from a Pom. Their record of only one test defeat since 1978 speaks for itself. But Bert?s reputation is nationwide down under?quite simply, he?s one of the best in the business.

Bert, who played for Leigh between 1950 and 1960, has spent much of his later years down under, lecturing to top-grade coaches in New South Wales.