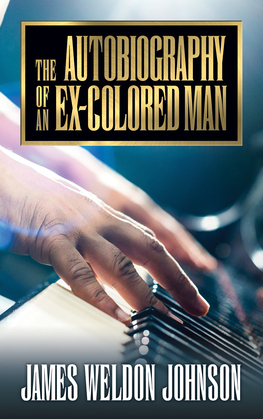 First published anonymously in 1912, James Weldon Johnson’s emotionally gripping fictional autobiography of a young biracial man living in America during the turn of the century is a landmark in black literary history and a classic of American fiction.

Masterfully exploring the complexity of race relations in America and the search for racial identity by one of mixed ethnicity, this pioneering work probes the psychological aspects of “passing for white” and examines the American caste and class system.

Narrated by a biracial man whose light skin allows him to “pass” for white, the novel describes a pilgrimage through America’s color lines at the turn of the century - from his attendance of a black college in Florida to an elite New York nightclub, from the rural South to the suburbs of the Northeast, and Europe.

The “Ex-Colored” man makes his living as a jazz pianist playing ragtime at a popular New York City club. While there, he catches the attention of a wealthy white gentleman who employs him to play at his parties. They become friends but a feeling of subservience prompts the narrator to part ways. He travels to the South to perfect his music and glorify the artistry of his race. But after witnessing a Southern lynching he abandons his desire to embrace his black heritage opting instead to “pass” as a white man.

Johnson influenced a generation of writers during the Harlem Renaissance and gave white readers a new perspective on the double standard of racial identity imposed on black Americans.