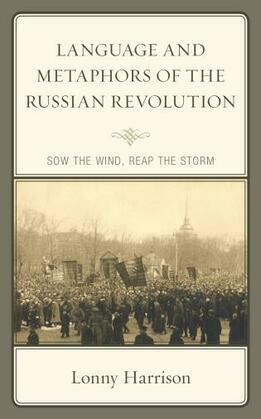 Language and Metaphors of the Russian Revolution

by Lonny Harrison (Author)
Buy for $45.00 Excerpt
Nonfiction History History by country Europe Russia 1945-1989 Other Revolutionary
warning_amber
One or more licenses for this book have been acquired by your organisation details

Language and Metaphors of the Russian Revolution: Sow the Wind, Reap the Storm is a panoramic history of the Russian intelligentsia and an analysis of the language and ideals of the Russian Revolution, from its inception over the long nineteenth century through fruition in early Soviet society. This volume examines metaphors for revolution in the storm, flood, and harvest imagery ubiquitous in Russian literary works. At the same time, it considers the struggle to own the narrative of modernity, including Bolshevik weaponization of language and cultural policy that supported the use of terror and social purging. This uniquely cross-disciplinary study conducts a close reading of texts that use storm, flood, and agricultural metaphors in diverse ways to represent revolution, whether in anticipation and celebration of its ideals or in resistance to the same. A spotlight is given to the lives and works of authors who responded to Soviet authoritarianism by reclaiming the narrative of revolution in the name of personal freedom and restoration of humanist values. Hinging on the clashes of culture wars and class wars and residing at the intersection of ideas at the very core of the fight for modernity, this book provides a critical reading of authoritarian discourse and investigates rare examples of the counter narratives that thrived in spite of their suppression.