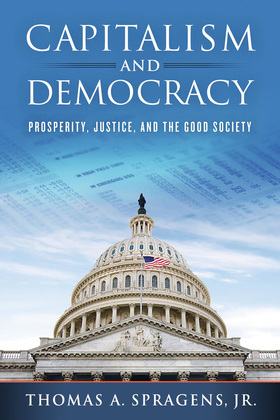 This book serves as an introduction to the ongoing political debate about the relationship of capitalism and democracy.

In recent years, the ideological battles between advocates of free markets and minimal government, on the one hand, and adherents of greater democratic equality and some form of the welfare state, on the other hand, have returned in full force. Anyone who wants to make sense of contemporary American politics and policy battles needs to have some understanding of the divergent beliefs and goals that animate this debate. In Capitalism and Democracy, Thomas A. Spragens, Jr., examines the opposing sides of the free market versus welfare state debate through the lenses of political economy, moral philosophy, and political theory. He asks: Do unchecked markets maximize prosperity, or do they at times produce wasteful and damaging outcomes? Are market distributions morally appropriate, or does fairness require some form of redistribution? Would a society of free markets and minimal government be the best kind of society possible, or would it have serious problems? After leading the reader through a series of thought experiments designed to compare and clarify the thought processes and beliefs held by supporters of each side, Spragens explains why there are no definitive answers to these questions. He concludes, however, that some answers are better than others, and he explains why his own judgement is that a vigorous free marketplace provides great benefits to a democratic society, both economically and politically, but that it also requires regulation and supplementation by collective action for a society to maximize prosperity, to mitigate some of the unfairness of the human condition, and to be faithful to important democratic purposes and ideals. This engaging and accessible book will interest students and scholars of political economy, democratic theory, and theories of social justice. It will also appeal to general readers who are seeking greater clarity and understanding of contemporary debates about government's role in the economy.