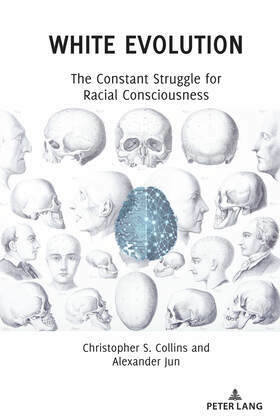 by Christopher S. Collins (Author), Alexander Jun (Author)
Buy for $33.95 Excerpt
Nonfiction Social science Sociology Demography
warning_amber
One or more licenses for this book have been acquired by your organisation details

Two fundamental and underlying principles drive White Evolution. The first is that evolution means constant movement in the fight against the virus of White supremacy. If the virus is evolving rapidly, then our critical consciousness needs to evolve faster in order to outpace the supremacy. The second is that this evolution is not an individual act?it must be done in community. The genetic makeup of human beings points to the necessity of interdependence. Growth and development do not lead to a solitary life so much as to being a dependable person rooted in community. The origin of White supremacy, on the other hand, is in reproducing uniformity and eradicating diversity. In an ecological framework, uniformity and monoculture is harmful to an ecosystem that needs diversity of thought, creativity, culture, perspective, history, and economy to survive. The White supremacy intended to "preserve the race" has created an enduring system of violence against people of color and is simultaneously hurting the endurability of humanity in exchange for the immediate gains of supremacy.

The book, White Evolution, recounts the historical movement toward supremacy and casts the possibility of a White evolution toward racial justice through collective critical consciousness. The constant struggle for racial consciousness has no arrival point. White consciousness will never be woke because there is no past tense and no plateau. When privilege and supremacy are akin to a constantly evolving and insidious virus (Whitefluenza), and the antidote is to outpace White evolution for supremacy with a White evolution for racial justice. This is not an individual task, but rather a systemic redesign and reconstruction of social systems and requiring the cultivation of a collective critical consciousness. White Evolution covers a great deal of historical detail and contemporary examples to explain and explore new possibilities for recognizing the importance of interdependence of humanity.