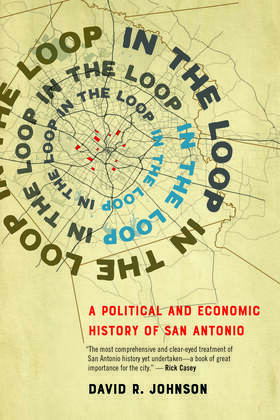 In the Loop: A Political and Economic History of San Antonio, is the culmination of urban historian David Johnson’s extensive research into the development of Texas’s oldest city. Beginning with San Antonio’s formation more than three hundred years ago, Johnson lays out the factors that drove the largely uneven and unplanned distribution of resources and amenities and analyzes the demographics that transformed the city from a frontier settlement into a diverse and complex modern metropolis.

Following the shift from military interests to more diverse industries and punctuated by evocative descriptions and historical quotations, this urban biography reveals how city mayors balanced constituents’ push for amenities with the pull of business interests such as tourism and the military. Deep dives into city archives fuel the story and round out portraits of Sam Maverick, Henry B. Gonzales, Lila Cockrell, and other political figures.

Johnson reveals the interplay of business interests, economic attractiveness, and political goals that spurred San Antonio’s historic tenacity and continuing growth and highlights individual agendas that influenced its development. He focuses on the crucial link between urban development and booster coalitions, outlining how politicians and business owners everywhere work side by side, although not necessarily together, to shape the future of any metropolitan area, including geographical disparities. Three photo galleries illustrate boosterism’s impact on San Antonio’s public and private space and highlight its tangible results.

In the Loop recounts each stage of San Antonio’s economic development with logic and care, building a rich story to contextualize our understanding of the current state of the city and our notions of how an American city can form.