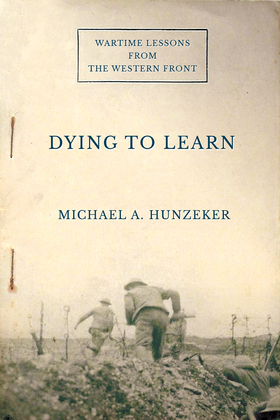 by Michael A. Hunzeker (Author)
Buy for $19.99 Excerpt
Nonfiction History History by country United States Other Military World War I Social science Political science Political freedom & security International security
warning_amber
One or more licenses for this book have been acquired by your organisation details

In Dying to Learn, Michael Hunzeker develops a novel theory to explain how wartime militaries learn. He focuses on the Western Front, which witnessed three great-power armies struggle to cope with deadlock throughout the First World War, as the British, French, and German armies all pursued the same solutions-assault tactics, combined arms, and elastic defense in depth. By the end of the war, only the German army managed to develop and implement a set of revolutionary offensive, defensive, and combined arms doctrines that in hindsight represented the best way to fight.

Hunzeker identifies three organizational variables that determine how fighting militaries generate new ideas, distinguish good ones from bad ones, and implement the best of them across the entire organization. These factors are: the degree to which leadership delegates authority on the battlefield; how effectively the organization retains control over soldier and officer training; and whether or not the military possesses an independent doctrinal assessment mechanism.

Through careful study of the British, French, and German experiences in the First World War, Dying to Learn provides a model that shows how a resolute focus on analysis, command, and training can help prepare modern militaries for adapting amidst high-intensity warfare in an age of revolutionary technological change.