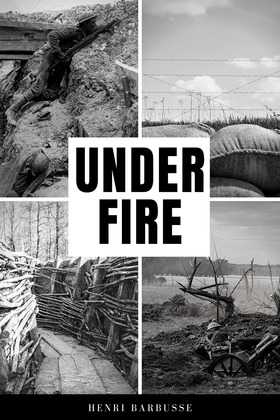 Henri Barbusse spent 22 months in the trench warfare during World War I. He gives us, from the inside, an instructive testimony of what was this horrible war. But it is also a major literary work that shows us that in some cases, the poetry of words is the only way to describe reality.

RUDELY awakened in the dark, I open my eyes: "What? What's up?"

"Your turn on guard—it's two o'clock in the morning," says Corporal Bertrand at the opening into the hole where I am prostrate on the floor. I hear him without seeing him.

"I'm coming," I growl, and shake myself, and yawn in the little sepulchral shelter. I stretch my arms, and my hands touch the soft and cold clay. Then I cleave the heavy odor that fills the dug-out and crawl out in the middle of the dense gloom between the collapsed bodies of the sleepers. After several stumbles and entanglements among accouterments, knapsacks and limbs stretched out in all directions, I put my hand on my rifle and find myself upright in the open air, half awake and dubiously balanced, assailed by the black and bitter breeze.

Shivering, I follow the corporal; he plunges in between the dark embankments whose lower ends press strangely and closely on our march. He stops; the place is here. I make out a heavy mass half-way up the ghostly wall which comes loose and descends from it with a whinnying yawn, and I hoist myself into the niche which it had occupied.

The moon is hidden by mist, but a very weak and uncertain light overspreads the scene, and one's sight gropes its way. Then a wide strip of darkness, hovering and gliding up aloft, puts it out. Even after touching the breastwork and the loophole in front of my face I can hardly make them out, and my inquiring hand discovers, among an ordered deposit of things, a mass of grenade handles.