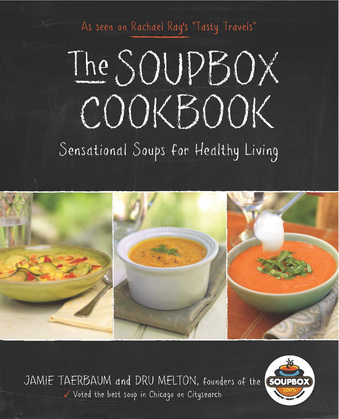 The Soupbox restaurant soups have received outstanding Yelp reviews, were voted the Best Soup in Chicago on Citysearch, and have been featured in local and national press and television including the Chicago Sun Times and on Rachael Ray’s Tasty Travels show. The Soupbox Cookbook, authored by the chef and founders of the restaurant, features both creative and traditional soups, stews and chowders from customer favorites to great new recipes to try. All the soups are wholesome and nourishing for the whole family, and most of them take as little as 15 minutes prep time. Try the Rosemary Chicken Dumpling Soup for a new twist on a traditional favorite, or the Magnificent Mushroom and Barley Soup, light and healthy yet satisfying and packed with Vitamin B. Readers will also find Latin and Asian flavors, adapted to become new family favorites including the Spicy Mayan Chicken Enchilada Fiesta. The book, like the restaurant, features multiple vegan, gluten-free and low-sodium options, showing a commitment to the health needs of its broad range of customers…and now readers. The Soupbox first opened in 1995 and features 12 different soups a day with a rotating list of hundreds. A selection of customer favorites as well as new soups developed for this book—125 great soup recipes in total—have been created by founders and authors Jamie Taerbaum and Dru Melton, who have more than 35 years restaurant experience between them.