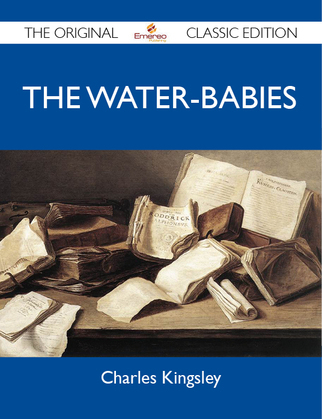 The Water-Babies - The Original Classic Edition

The Water-Babies - The Original Classic Edition

This is a high quality book of the original classic edition.

This is a freshly published edition of this culturally important work, which is now, at last, again available to you.

Enjoy this classic work. These few paragraphs distill the contents and give you a quick look inside:

As for chimney-sweeping, and being hungry, and being beaten, he took all that for the way of the world, like the rain and snow and thunder, and stood manfully with his back to it till it was over, as his old donkey did to a hail-storm; and then shook his ears and was as jolly as ever; and thought of the fine times coming, when he would be a man, and a master sweep, and sit in the public-house with a quart of beer and a long pipe, and play cards for silver money, and wear velveteens and ankle-jacks, and keep a white bull-dog with one gray ear, and carry her puppies in his pocket, just like a man.

...At last, at the bottom of a hill, they came to a spring; not such a spring as you see here, which soaks up out of a white gravel in the bog, among red fly-catchers, and pink bottle-heath, and sweet white orchis; nor such a one as you may see, too, here, which bubbles up under the warm sandbank in the hollow lane by the great tuft of lady ferns, and makes the sand dance reels at the bottom, day and night, all the year round; not such a spring as either of those; but a real North country limestone fountain, like one of those in Sicily or Greece, where the old heathen fancied the nymphs sat cooling themselves the hot summer's day, while the shepherds peeped at them from behind the bushes.

...But Tom and his master did not go in through the great iron gates, as if they had been Dukes or Bishops, but round the back way, and a very long way round it was; and into a little back-door, where the ash-boy let them in, yawning horribly; and then in a passage the housekeeper met them, in such a flowered chintz dressing-gown, that Tom mistook her for My Lady herself, and she gave Grimes solemn orders about "You will take care of this, and take care of that," as if he was going up the chimneys, and not Tom.

...In a word, never was there heard at Hall Place-not even when the fox was killed in the conservatory, among acres of broken glass, and tons of smashed flower-pots-such a noise, row, hubbub, babel, shindy, hullabaloo, stramash, charivari, and total contempt of dignity, repose, and order, as that day, when Grimes, gardener, the groom, the dairymaid, Sir John, the steward, the ploughman, the keeper, and the Irishwoman, all ran up the park, shouting, "Stop thief," in the belief that Tom had at least a thousand pounds' worth of jewels in his empty pockets; and the very magpies and jays followed Tom up, screaking and screaming, as if he were a hunted fox, beginning to droop his brush.

...The boughs laid hold of his legs and arms, poked him in his face and his stomach, made him shut his eyes tight (though that was no great loss, for he could not see at best a yard before his nose); and when he got through the rhododendrons, the hassock-grass and sedges tumbled him over, and cut his poor little fingers afterwards most spitefully; the birches birched him as soundly as if he had been a nobleman at Eton, and over the face too (which is not fair swishing as all brave boys will agree); and the lawyers tripped him up, and tore his shins as if they had sharks' teeth-which lawyers are likely enough to have.