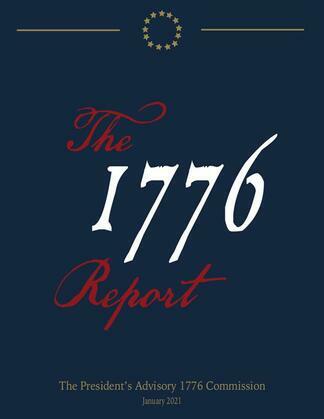 The Report of the President's Advisory 1776 Commission was released on 18 January 2021 and is a well written rebuttal to identity politics. It fundamentally reflects the ideals of the Declaration of Independence and Constitution.

The “crusade against American history is toxic propaganda, ideological poison, that, if not removed, will dissolve the civic bonds that tie us together, will destroy our country,” Trump said at the time.

The 1776 Commission report was praised by the Wall Street Journal. They offer a long view of its meaning: America's history is objectively extraordinary, and we should accept that. It should be faithfully taught that way.

The Commission was established to counter the New York Times-initiated 1619 hoax, which is teaching American children that the nation was not founded on the Declaration of Independence in 1776, but on the basis of the slavery introduced into the colonies by the British Empire in 1619.

The Commission praised the natural rights of man stated in the Declaration—that all men are created equal and that governments serve at the consent of the governed—and denounced the “identity politics” as racist and counter to these concepts.

Among the virtues to be cultivated in the American republic, the founders knew that a free people must have a knowledge of the principles and practices of liberty, and an appreciation of their origins and challenges.

While this country has its imperfections, just like any other country, in the annals of history the United States has achieved the greatest degree of personal freedom, security, and prosperity for the greatest proportion of its own people and for others around the world. These results are the good fruit of the ideas the founding generation expressed as true for all people at all times and places.

An authentic civics education will help rebuild our common bonds, our mutual friendship, and our civic devotion. But we cannot love what we do not know.

This is why civics education, education relating to the citizen, must begin with knowledge, which is, as George Washington reminds us, “the surest basis of public happiness.”

Hopefully it will be widely read by the upcoming generations who are being fed a daily diet of fiction on the country’s foundation. If the Report leads to a more balanced view of the history of the United States – which is overwhelmingly positive with some rough edges – then it will have achieved much.

The facts of our founding are not partisan. They are a matter of history. Controversies about the meaning of the founding can begin to be resolved by looking at the facts of our nation’s founding.

Properly understood, these facts address the concerns and aspirations of Americans of all social classes, income levels, races and religions, regions and walks of life. As well, these facts provide necessary—and wise—cautions against unrealistic hopes and checks against pressing partisan claims or utopian agendas too hard or too far.