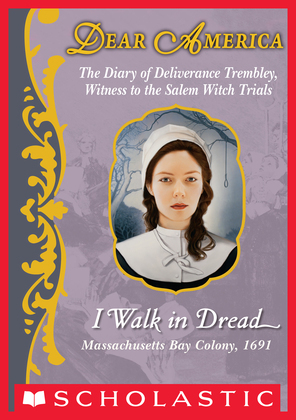 Dear America: I Walk in Dread

by Lisa Rowe Fraustino (Author)
Buy for $8.99 Excerpt
Fiction Juvenile & young adult Historical United States Colonial & revolutionary periods
warning_amber
One or more licenses for this book have been acquired by your organisation details

Lisa Rowe Fraustino's dramatic tale of the Salem witch trials is back in print with a beautiful new cover design!

Deliverance Trembley lives in Salem Village where she must take care of her sickly sister, Mem, and where she does her daily chores in fear of her cruel uncle's angry temper. But after four young girls from the village accuse some of the local women of being witches, the town becomes increasingly caught up in a witch hunt. When the villagers begin to realize that Deliverance is a clever girl who possesses the skills to read and write, the whispered accusations begin. Suddenly she has more to worry about than just the wrath of her uncle, her ill sister, and the fate of the other women in town. Within the pages of her diary, Deliverance captures the panic, terror, suspicion, and hysteria that swept through Salem Village during one of the most infamous eras in American history.