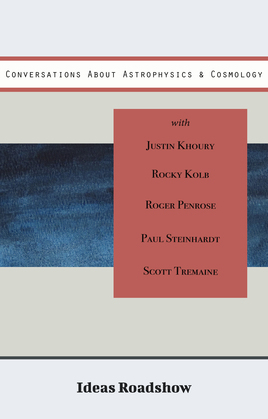 by Howard Burton (Author)
Buy for $9.99 Excerpt
Nonfiction Science and technics Science Astronomy Astrophysics & space science Cosmology
warning_amber
One or more licenses for this book have been acquired by your organisation details

FIVE BOOKS IN ONE! This collection includes the following 5 complete Ideas Roadshow books featuring leading researchers providing fully accessible insights into cutting-edge academic research while revealing the inspirations and personal journeys behind the research. A detailed preface highlights the connections between the different books and all five books are broken into chapters with a detailed introduction and questions for discussion at the end of each chapter:

I. Cosmological Conundrums - A conversation with Justin Khoury. This book is based on an in-depth filmed conversation between Howard Burton and Justin Khoury, Professor of Physics at the University of Pennsylvania. This extensive conversation gives a window into the world of a practicing, theoretical physicist cosmologist, the often-considerable gap between formal scientific positions and personal scientific interests and examines a wide range of fascinating topics that his research covers such as the early universe, the Big Bang, dark matter, dark energy, Cosmic Microwave Background, the MOND (Modified Newtonian Dynamics) theory, and more.

II. Astrophysical Wonders - A conversation with Scott Tremaine. This book is based on an in-depth filmed conversation between Howard Burton and Scott Tremaine, Professor Emeritus of Astrophysics at the Institute for Advanced Study and an internationally renowned expert in both galactic-scale and planetary-scale astronomy. Topics that are part of this extensive conversation include the process of scientific discovery, in particular related to comets, Pluto, planetary rings, shepherding satellites, exoplanets, chaos theory and the formation, stability and uniqueness of our solar system. Further topics include galactic-scale astronomy, galaxy formation, dark matter, quasars, black holes, the large-scale structure of the universe and many outstanding open questions of contemporary astrophysics.

III. A Universe Of Particles: Cosmological Reflections - A conversation with Rocky Kolb. This book is based on an in-depth filmed conversation between Howard Burton and Rocky Kolb, the Arthur Holly Compton Distinguished Service Professor of Astronomy and Astrophysics at the University of Chicago. After an inspiring story of how Rocky Kolb became interested in science, this wide-ranging conversation covers topics such as the development of and his work on inflationary cosmology, the Standard Model of particle physics, dark matter, dark energy, Modified Newtonian Dynamics (MOND), the Large Hadron Collider, advice for high-school teachers to ignite a passion for learning in students, and more.

IV. Inflated Expectations: A Cosmological Tale - A conversation with Paul Steinhardt. This book is based on an in-depth filmed conversation between Howard Burton and Paul Steinhardt, the Albert Einstein Professor of Science and Director of the Center for Theoretical Science at Princeton University. He is one of the originators of the theory of cosmic inflation and has become one of its fiercest critics. This fascinating conversation covers topics such as Paul Steinhardt’s scientific development, his formative experiences at Caltech including his encounters with Richard Feynman, his development and later scepticism of the theory of cosmic inflation, the response of the scientific community to the failure of this theory, his theory of cosmology, The Ekpyrotic Universe, and more.

V. The Cyclic Universe - A conversation with Roger Penrose.
This extensive conversation between Howard Burton and Roger Penrose, co-recipient of the 2020 Nobel Prize in Physics and Emeritus Rouse Ball Professor of Mathematics at the Mathematical Institute at the University of Oxford, explores the fundamental problem that is consistently being overlooked in modern cosmology, “Why did our universe begin in such a particular state of extremely low entropy?”, Roger Penrose's motivation to come up with his Conformal Cyclic Cosmology (CCC) theory and detailed insights into his groundbreaking research.

Howard Burton is the founder and host of all Ideas Roadshow Conversations and was the Founding Executive Director of Perimeter Institute for Theoretical Physics. He holds a PhD in theoretical physics and an MA in philosophy.