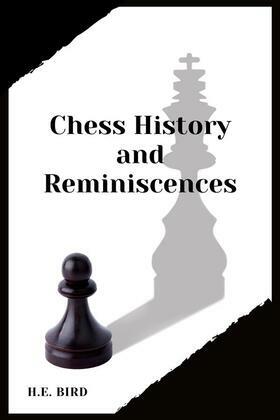 by H. E. Bird (Author)
Buy for €1.99 Excerpt
Nonfiction Nature, recreation and sports Games Reference
warning_amber
One or more licenses for this book have been acquired by your organisation details

“Unlike other games in which lucre is the end and aim, [chess] recommends itself to the wise by the fact that its mimic battles are fought for no prize but honor. It is eminently and emphatically the philosopher’s game.” – Paul Morphy

Chess remains a highly popular pastime to this day. Worldwide, chess claims about 600 million fans, which makes it one of the most popular games or sports. Tracing the history and origins of chess can yield interesting insights about the history of human civilization. Written by one the best players himself, Chess history and reminiscences is a beautiful account of the development of the game and its brief history. Bird's aim is threefold: to present as complete a record as is possible of the varieties of chess that exist or have existed in different parts of the world; to investigate the ultimate origin of these games and the circumstances of the invention of chess; and to trace the development of the modern European game from the first appearance of its ancestor, the Indian chaturanga, in the beginning of the 7th century. This book is full of interest and points of excellence, and can scarcely fail to afford amusement and pleasure. It will be of especial service to amateurs who aspire to preeminence in chess. You will find all kinds of interesting nuggets adding to the more traditional material found in the better known histories of the game.