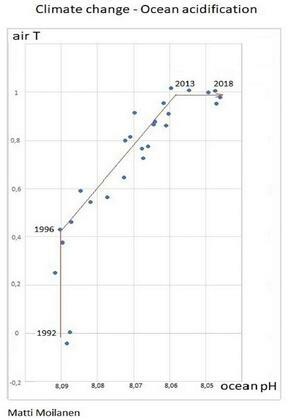 The book will prove using mathematical models and statistics that we are dealing with a much broader phenomenon than just the climate change and climate carbon dioxide increase. The book will proceed from a basic climate model to the ocean carbon dioxide dissolving to the oceans causing chemical reaction and energy storing into the oceans. They form the global energy change model, which are also related to the El Niño and La Niña phenomenon. The research leads to the alarming conclusion that the ocean acidification process can mislead the sceptics to believe that the rise of climate carbon dioxide does not cause climate change warming and all actions to prevent the carbon dioxide rise are useless. At the same time the oceans acidify all the time and all biota are about to die in 60 years in the seas if the ocean acidification goes on. The cumulative energy storage in the oceans can furthermore hide the destructive consequence that when the acidification reaches the critical point of time, the energy stored in the oceans may release causing extra hot temperatures. After this point there is nothing mankind can do to prevent the climate change consequences. The monitoring of the ocean state has been neglected while the interest has been focused on climate change. All the topics above are presented in the book using mathematical analysis