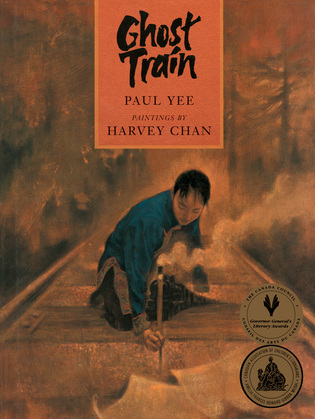 The story of a young Chinese girl who arrives in North America only to discover that her father has died building the railway.

This powerful, unforgettable and multi-award-winning tale is based on the lives of the Chinese who settled on the west coast of North America in the early 1900s.

Left behind in China by her father, who has gone to North America to find work, Choon-yi has made her living by selling her paintings in the market. When her father writes one day and asks her to join him, she joyously sets off, only to discover that he has been killed.

Choon-yi sees the railway and the giant train engines that her father died for, and she is filled with an urge to paint them. But her work disappoints her until a ghostly presence beckons her to board the train where she meets the ghosts of the men who died building the railway. She is able to give them peace by returning their bones to China where they were born.

Ghostly, magical and yet redeeming, this tale is superbly illustrated by Harvey Chan.