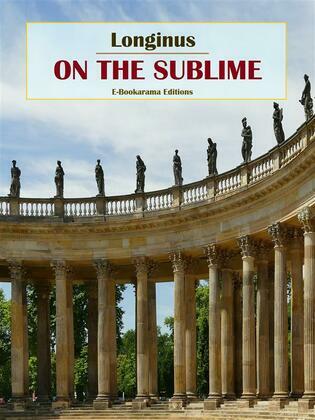 "On the Sublime" by Longinus is a work of literary criticism thought to date back to 1st century Rome. The earliest surviving manuscript, from the 10th century, was first printed in 1554.

While the author is not definitively known, Longinus or Pseudo-Longinus is typically credited for the work.

"On the Sublime" centres on aesthetics and the benefits of strong writing. Longinus does this by analysing both strong and weak writing from works written over the previous thousand years. The goal, according to Longinus, is to achieve the sublime. In philosophy, the sublime is a quality of greatness. It can be physical, intellectual, moral, aesthetic, spiritual, artistic, or metaphysical. Another quality of of the sublime is that it can’t be calculated, imitated, or measured.

"On the Sublime" is written in epistolary form. An epistolary work is usually written through letters, journal entries, or a combination of the two.

"On the Sublime" is one of a number of classical literary treatises that pose the often-considered problem of nature versus art, of the relative contributions of natural genius or inspiration and of acquired skill to great writing.