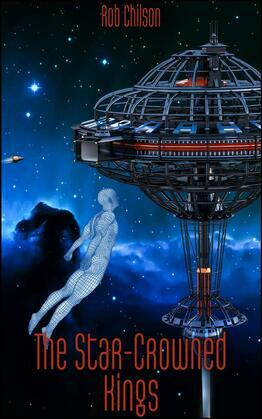 The human race has split into two groups: ordinary people like Race and his mother and sister, and the Starlings, humans with godlike telekinetic powers.  Their powers enable them to carry spaceships to the stars and settle many planets, while ordinary folk are no better than slaves.  Now Race finds that he has Starling powers, too.

First correction to his visualization: there was no stream of traffic. He saw and sensed three or four ships; as many more might be out of his range.

They were running right into Slavin’s trap. His stomach lighter and more hollow with fear, he extended his mind, enfolding the fast little freighter within it, moving it as he had moved Dinine between stars. No acceleration was felt within the ship; instead, they felt Jacarantha’s grip weakening, draining away. Race crowded the safety limit, the air-speed indicator whining.

The transponder beeped in warning before they were out of atmosphere and Race felt a wave of despair. It was off, not replying to that insistent question from space. But where radar probed, coherent light beams also would be. The yellow sky had long since turned green, then blue; now, royal purple set with stars.

The transponder carilloned and the radio barked at him harshly on the official space frequency: “Attention freighter, halt at once or—”

Another voice cut in as authoritatively, but Race wasn’t listening. From low, fast orbit overhead a ship had flashed up behind him; he felt it swell. A fast-moving dot before him would be another. He was keyed up intolerably and turned the ship now without a thought.

At his right hand was a handle in the hull. Moving it swiveled a tele-periscope that combined a low-powered wide-angle view with a high-powered narrow-angle one. Immediately below their line of sight and precisely parallel to it was a glass tube about an inch in diameter and five inches long. Connected to it was a pocket in the hull, containing a handful of common glass marbles. The whole apparatus was outside the airseal.

It was the work of but a moment to line the telescope and tube on the growing dot of light that was the first ship. He had placed marbles at the bases of the firing ports before takeoff, and now he flicked one as he had flicked pebbles like bullets in the Mountains of the Oroné months before, but with the fury of despair.

Involuntarily he blinked — in time to save his vision.

The Starling ship erupted in a fireball that illuminated half the world below. For half a second Race stared horrified at the destruction he had wrought. Then fear blossomed like that spreading glare: every Starling in the area knew where he was now. He swerved the ship away recklessly, not hearing the clangor of the radiation alarm.

His mind swooped and reeled as things like planets whipped past in less than an eyeblink — two of them, almost on opposite sides of the ship, one nearer than the other. On the radio two voices were bellowing, one, “Surrender!”, the other, “Shoot! Shoot!”

Another thing flicked past, invisible, undetectable but to his mind — seeming to have planetary mass yet to be incredibly tiny. Marbles like his own, flicked at near light speed.

Fear galvanized him. His rolling gaze touched the Imperial Cluster and in a moment the ship was in incredible motion toward it. Jacarantha shrank behind them.