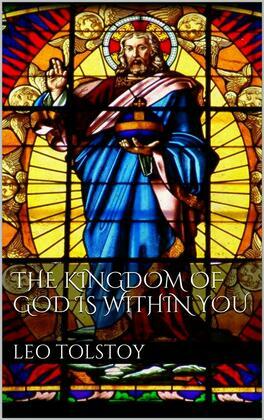 The Kingdom of God is Within You

In 1884 I wrote a book entitled "My Religion," wherein I formulated my creed.
While affirming my faith in the doctrine taught by Christ, I could not refrain from manifesting at the same time the reason why I look upon the ecclesiastical doctrine commonly called Christianity as erroneous, and to me incredible.
Among the many deviations of the latter from the doctrine of Christ, I called attention to the principal one; namely-the evasion of the commandment that forbids man to resist evil by violence, as a striking example of the perversion of the doctrine of Christ by ecclesiastical interpretation.
I knew but little, no more than other men, of what had been taught or written on the subject of non-resistance in former times. I was familiar with the opinions of the Fathers of the Church, Origen, Tertullian, and others; and I also knew of the existence of certain sects called Mennonites, Herrnhuters, and Quakers, all of which forbid Christians the use of arms, and will not submit to conscription, but I never knew the arguments by which these sects sought to maintain their views.
My book, as I had anticipated, was prohibited by the Russian censors, but partly in consequence of my reputation as a writer, partly because it excited curiosity, it had a circulation in manuscript, and while, on the one hand, it called forth from those persons who sympathized with my ideas, information concerning works written on the same subject, on the other, it excited criticisms on the opinions therein maintained.
These two results, together with the historical events of recent years, made many things clear to me, and led me to many new deductions and conclusions which I now desire to set forth.
I shall speak in the first place of the information I received in regard to the history of this matter of non-resistance to evil; and in the second place, of the arguments upon the subject offered by religious critics, that is, by critics who profess the religion of Christ, as well as those of secular critics, that is to say, of men who make no such profession; and finally, the conclusions which I drew from the arguments of both parties, as well as from the historical events of later years.