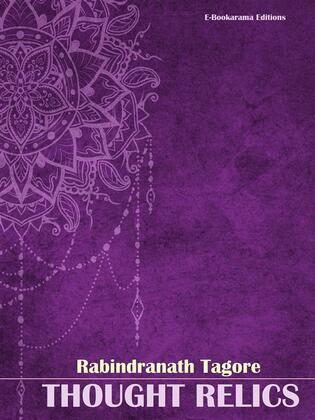 Rabindranath Tagore, also known by the sobriquet Gurudev, was a Bengali poet, philosopher, artist, playwright, composer and novelist. His body of literature is deeply sympathetic to the poor and upholds universal humanistic values. His poetry drew from traditional Vaisnava folk lyrics and was often deeply mystical.

He became Asia's first Nobel laureate when he won the 1913 Nobel Prize in Literature.

Written in 1921, "Thought Relics" is a brilliant and recommended example of Tagore's work, an essay about soul and spirituality and how both are important to succeed.

"It is given to us to reveal our soul, that which is One in us, which is eternal. This can only be done by its passage through the fleeting Many; to assert the infinity of the spirit by continual sacrifice of forms. The self being the vessel that gathers and holds gives us the opportunity of giving up. If we believe only in self then we anxiously cling to our stores which causes us misery and failure. When we believe in soul the very inconstancy of life finds its eternal meaning and we feel that we can afford to lose."