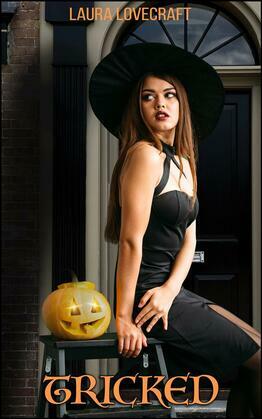 18-year-old churchgoing good girl Keri is ready to have some adult bad girl fun. Lying to her parents she plans on attending a wild Halloween party where she can cut loose and have the kind of sex she's craved, but never experienced. But first she does some trick or treating. The night starts out perfectly until Keri knocks on the wrong door and is tricked into becoming an unwilling treat!

Keri turned down a walkway and approached a large one story house. She paused when she saw all the lights were out except for the porch. She noticed a sign hung on the door and decided to walk down to look. “Candy around back.”

Keri wasn’t sure she wanted to walk around to someone’s back yard, but some young kids came from the side of the house and she heard a girl say “That guy’s awesome, he’s giving out the big candy bars!”

She rang the bell. The door opened revealing a tall man holding a basket filled with several different candy bars.

“Sorry, these for kids, not coeds looking for a free snack.”

“I’m still a kid at heart,” she gave him a big smile, and seeing his eyes, like every other guy had been, had gravitated to her chest, threw in a shrug, making her braless breasts jiggle. “And you’re never too old to have fun.”

“You’re not dressed like a little kid,” his eyes, which she noticed were a beautiful shade of deep blue, wandered up and down her body. “But you look like you’re dressed for fun.”

His words were accompanied by a smile as pretty as his eyes. His teeth where bright and perfect, the white cutting through the dark scruff of a five o’clock shadow.

“All kinds of fun!” she giggled and turned side to side playfully.

She liked how he was looking at her, and the fact he was attractive didn’t hurt. There were a few streaks of gray in his otherwise black hair, and flecks of it in the stubble on his face, but his hair was still thick and his face smooth.

She figured he was probably in his forties, and going by the way the blazer he wore stretched across his shoulders, he was pretty rugged. He wore a white button down shirt under the blazer, but had on black jeans rather than suit pants along with a pair of black sneakers.

“I can tell. Is it free fun, or you tricking for some treats?” The smile remained but didn’t seem as friendly.

“God, why do I keep hearing that?”

“Because you’re dressed like a slut, not a girl looking for some candy.”

She went to turn away, but he caught her arm.

There was an air of command in her tone that froze her, He wasn’t squeezing hard, but his large hand was wrapped completely around her forearm. She could feel the restrained strength in his grip, and a sudden wave of fear passed through her. He was a large man and no one could see them back here.

“Let me go!” She looked around, hoping some kids would come around the corner.

“I will, but you’re going to stay here and answer a couple of questions young lady.”

“I’m not answering anything.” The tremble in her voice didn’t lend conviction to her words.

“Is that so?” His smile was gone. “Maybe this will change your mind.”

He reached into his jacket and produced a leather folder. He flipped it open and Keri’s eyes widened when she saw what it was.