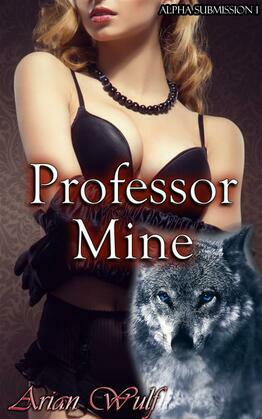 Tanya is a book-smart, street-dumb human student who just got into the university of her dreams and thinks she deserves to have a good time at a rave. Instead, she wanders into a werewolf party. Charles is a drop-dead-gorgeous, powerful Alpha werewolf who has been tutoring Tanya and her classmates for the entire year and just wants to head home. Instead, he catches his student at a Werewolf Rave.

He leans into her until his lips are pressed against her ear, his stubble brushing against her soft skin gently. He's older, that's for sure. None of the guys she knows in her school is this confident. He nips her earlobe playfully and says, "What's a pretty little human like you doing at a place like this?"

She doesn't know whether to be disgusted or horrified, so she does both, pushing him back and away from her. Or at least, she attempts to. Her hands press against his chest, but she doesn't seem to be making any progress freeing herself. The man's a tank.

She hears a snarl and the next thing she knows; the man is being yanked away from her forcibly. She gasps, stumbling back from the sudden loss of support.

"Keep your hands to yourself," the newcomer growls.

"Hey, sorry man. Didn't know she was taken, alright?" the guy says, hands in the air. Her savior must be really scary, because he's not even trying to stand his ground. He disappears into the crowd before her savior could say anything.

"Thank you," she starts. "I don't know what-" she stops talking altogether. The stranger isn't really a stranger, after all. Charles has been her school-assigned tutor for SAT since the beginning of the year and she has been harboring a not-so-secret crush on him since their first meeting. Her and half of the girls in her SAT class, probably.

He's smart, sophisticated, and doesn't look at her with pity like the rest of the teachers. He treats her the same as he treats everyone else. Cool indifference. He has always kept things professional though, something she deeply resents. He probably doesn't even know her name.

She never thought she would see him again after she graduated high school. Seeing him here, now, is like a dream come true. She has to remind herself to breathe.

"What're you even doing here, Tanya?" he snarls, turning back to her. The malice in his tone strikes her deep. She feels like something's clenching her heart. His eyes flash red, the fingers on her arm are slightly clawed. She flinches as his fingers tighten around her arm hard enough to hurt. It takes a few deep breaths for him to get himself back to normal again.

She's never realized he's an Alpha. The werewolves in her class are too young to have their own packs, or even joined anybody else's.

"I asked you what you're doing here, Tanya," he says, his tone so much like a reprimanding teacher that she can't help but feel irritated.

"This is a werewolf rave," he says, gripping her by the arm. She pulls herself free and understands that she is only able to succeed because he lets her.

He looks at her like she's grown a second head all of a sudden. "This is a werewolf rave where humans come to be used."