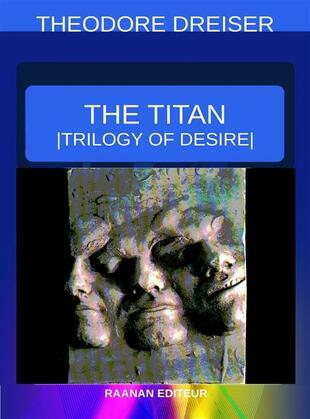 The Titan is a novel by Theodore Dreiser, completed in 1914 as a sequel to his 1912 novel The Financier. Both books were originally a single manuscript, but the narrative's length required splitting it into two separate novels. Dreiser's manuscript of The Titan was rejected by Harper & Brothers, publisher of The Financier, due to its uncompromising realism ; John Lane published the book in 1914. The Titan is the second part of Dreiser's Trilogy of Desire, a saga of ruthless businessman Frank Cowperwood (modeled after real-life streetcar tycoon Charles Yerkes). The third part of the trilogy, The Stoic, was Dreiser's final novel, published in 1947 after his death.

| After his release from prison, Frank Cowperwood invests in stocks subsequent to the Panic of 1873, and becomes a millionaire again. He decides to move out of Philadelphia and start a new life in the West. He moves to Chicago with Aileen and his attorney is finally able to persuade Lillian to agree to a divorce. Frank decides to take over the street-railway system. He bankrupts several opponents with the help of John J. McKenty and other political allies. Meanwhile, Chicago society finds out about his past in Philadelphia and the couple are no longer invited to dinner parties; after a while, the press turns on him too. Cowperwood is unfaithful many times. Aileen finds out about a certain Rita and beats her up. She gives up on him and has an affair with Polk Lynde, a man of privilege; she eventually loses faith in him. Meanwhile, Cowperwood meets young Berenice Fleming; by the end of the novel, he tells her he loves her and she consents to live with him. However, the ending is bittersweet as Cowperwood has not managed to obtain the fifty-year franchise for his railway schemes that he wanted...|