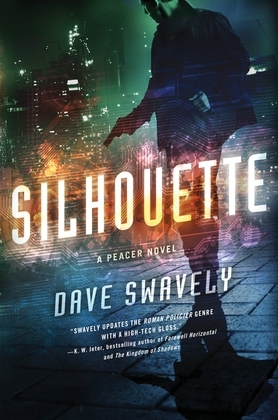 Minority Report meets Blade Runner as a man must solve his daughter's murder only to find that the trail leads right back to himself in Dave Swavely's Silhouette, the first of The Peacer Series

A post-quake San Francisco is ruled by a private corporation called the Bay Area Security Service. Its founder, Saul Rabin, is revered by many as the savior of the city, but by others he is feared and loathed as a fascist tyrant. And because of the cutting-edge antigravity technology being developed by his company, this controversial figure is about to become the most powerful man in the world.

To his protégé, Michael Ares, the old man is a mysterious benefactor whom he respects and admires. But when Michael's daughter and best friend are brutally murdered, he follows a trail of evidence that leads dangerously close to home. Closer than he could ever imagine.

A future world of aerocars, net glasses, and neural cyberware provides the backdrop for this timeless tale of good and evil, revenge and love, infamy and destiny. Fans of Blade Runner and Ghost in the Shell will love this page-turner filled with thought-provoking images of dark shapes which, despite their pain and power, could never blot out the light that surrounds them.