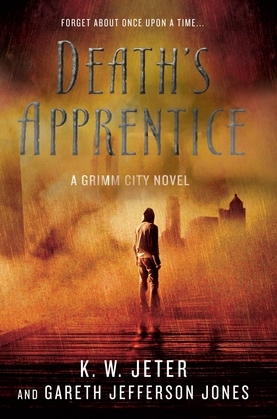 Built on top of the gates of Hell, Grimm City is the Devil's capital on earth. A place where every coffee shop, nightclub and shopping mall is the potential hunting ground for a ghost, a demon, or any of the other supernatural entities that inhabit the Grimm City world.

Death's seventeen-year-old apprentice, Nathaniel, comes into his own as he leads an uprising against the Devil with the help of a half-dead wraith and a giant hit-man. What results is a bloody, brutal revolt that calls upon the loyalties of both the living and the dead.

Based not only upon the Brothers Grimm well-known fairy tales, but also upon their "unknown" sagas and essays, K. W. Jeter & Gareth Jefferson Jones's Death's Apprentice is the first novel to be based upon the entire Grimm canon. Such a comprehensive, in-depth adaptation of the works of the Brothers Grimm has never been published before!