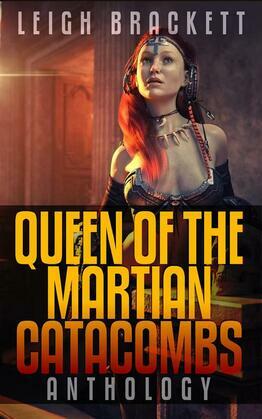 Gaunt giant and passionate beauty, they dragged their thirst-crazed way across the endless crimson sands in a terrible test of endurance. For one of them knew where cool life-giving water lapped old stones smooth -- a place of secret horror that it was death to reveal!

Erik John Stark is sent on a perilous mission into the Valkis and encounters the Queen of the Martian Catacombs.

Leigh Douglass Brackett (1915–1978) was an American writer, particularly of science fiction; she is one of the few women writers to be at the forefront of science fiction’s “Golden Age.” Brackett was also a screenwriter, known for her work on films from *The Big Sleep* (1945) to *The Empire Strikes Back* (1980).

“Queen of the Martian Catacombs” and “Black Amazon of Mars” are the first two novellas in her Eric John Stark series. The third and final installment is included: "Enchantress of Venus". These stories, spanning a sprawling (and scientifically impossible) Solar System, are rolicking adventures in the tradition of Edgar Rice Burroughs’ John Carter and Robert E. Howard’s Conan the Barbarian. They are excellent examples of pulp science fiction at its “pulpy-est”—manly men, warrior women, and non-stop action.

The leader of the four men rode slowly toward the tor, his right arm raised.His voice carried clearly on the wind.

"Eric John Stark!" he called, and the dark man tensed in the shadows.The rider stopped. He spoke again, but this time in a different tongue. It was no dialect of Earth, Mars or Venus, but a strange speech, as harsh and vital as the blazing Mercurian valleys that bred it.

"Oh N'Chaka, oh Man-without-a-tribe, I call you!"There was a long silence. The rider and his mount were motionless under the low moons, waiting.

Eric John Stark stepped slowly out from the pool of blackness under the tor."Who calls me N'Chaka?"

The rider relaxed somewhat. He answered in English, "You know perfectly well who I am, Eric. May we meet in peace?"

He walked on to meet the rider, who had dismounted, leaving his beast behind. He was a slight, wiry man, this EPC officer, with the rawhide look of the frontiers still on him. His hair was grizzled and his sun-blackened skin was deeply lined, but there was nothing in the least aged about his hard good-humored face nor his remarkably keen dark eyes.

Stark nodded. "Sixteen years." The two men studied each other for a moment, and then Stark said, "I thought you were still on Mercury, Ashton."

"They've called all us experienced hands in to Mars." He held out cigarettes. "Smoke?"

Stark took one. They bent over Ashton's lighter, and then stood there smoking while the wind blew red dust over their feet and the three men of the patrol waited quietly beside the Banning. Ashton was taking no chances. The electro-beam could stun without injury.

Presently Ashton said, "I'm going to be crude, Eric. I'm going to remind you of some things."

"Save it," Stark retorted. "You've got me. There's no need to talk about it."

"Yes," said Ashton, "I've got you, and a damned hard time I've had doing it. That's why I'm going to talk about it."His dark eyes met Stark's cold stare and held it...