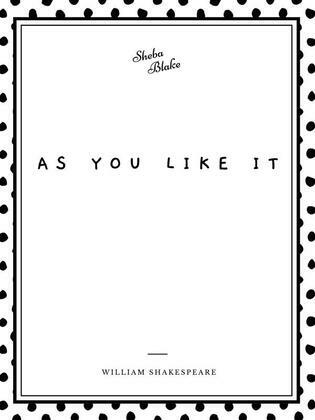 As You Like It is a classic romantic comedy by William Shakespeare.

As You Like It is truly one of Shakespeare's greatest romantic comedies. The heroine, Rosalind has grown up in the court of her usurping uncle Duke Frederick, her father, the rightful duke, having been exiled by his younger brother. Rosalind falls in love with Orlando, but Orlando is forced to flee when he is persecuted by his older brother Oliver. Soon Rosalind is also banished from the court by her uncle. Switching genders she assumes the identity of Ganymede and with her cousin Celia in tow goes in search of her father. Finding him and his friends in the Forest of Arden the young girls join the exiles before finally being reunited with their lovers, a mellowed Oliver and an evil uncle who has found religion.