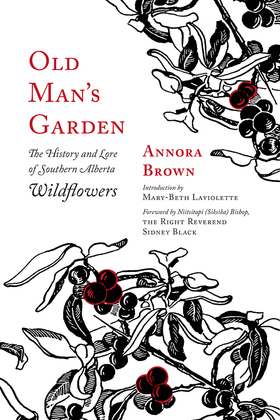 Originally published in 1954, Annora Brown?s Old Man?s Garden is a Canadian classic that tells the story of Southern Alberta?s native plants and wildflowers through art and in consideration of Indigenous traditional knowledge from the region.

Accompanying the new RMB edition of Old Man?s Garden, Sidney Black of Fort Macleod, the Indigenous Anglican Bishop for Treaty 7, provides his own commentary about Annora?s art and writing in relation to the Blackfoot, while independent art curator Mary-Beth Laviolette broadens the story about the artist?s contribution to Canadian art.

Also included in this new edition are full-colour images of Annora?s later paintings of Blackfoot lodges (tipis) and regalia, the dramatic landscape of the Oldman RIver region such as Waterton National Park, and her abiding, lifelong regard for the flora of her homeland.

According to Annora Brown, Old Man?s Garden is a ?book of gossip about the flowers of the West.? A one-of-a-kind work featuring 169 black-and-white drawings of flowers and native plants, this classic text is about more than botany. Throughout its pages there is a sparkle to her stories of early exploration and settlement, her concern for conservation, and her regard for the Blackfoot Nation.