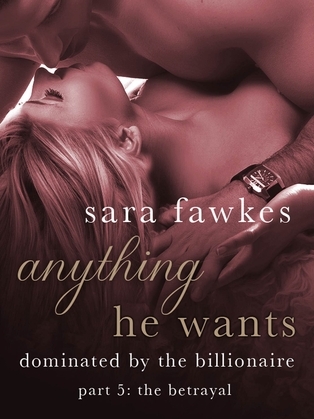 Anything He Wants: The Betrayal (#5)

In the explosive fifth installment of Anything He Wants, Lucy Delacourt continues her scorching affair with a powerful billionaire who always gets what he wants. And as she navigates his world of glittering opulence and all-consuming passion, she explores the darkest reaches of her own desire.

Lucy's understanding of the enigmatic Jeremiah Hamilton has grown deeper, and now she finds herself craving not only his sinful touch but his guarded heart. But happily ever after may be further than ever before, because Jeremiah is being hunted by an assassin known as the Archangel?an assassin who will stop at nothing to bring the billionaire down. But despite the danger closing in on them, her greatest threat is her own desire to surrender completely to Jeremiah?body, heart and soul.
Don't miss the previous installments of the scorching serial novel Anything He Wants: The Meeting (Part 1), The Contract (Part 2), The Secret (Part 3) and The Rescue (Part 4) available now.