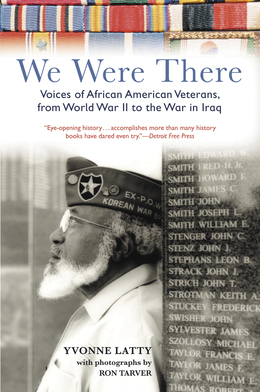 The Greatest Generation meets Bloods in this revealing oral history of the unrecognized contributions of African American veterans.

Award-winning journalist Yvonne Latty never bothered to find out the extent of her father's service until it was almost too late. Inspired by his moving story -- and eager to uncover the little-known stories of other black veterans, from those who served in the Second World War to the War in Iraq -- Latty set about interviewing veterans of every stripe: men and women; army, navy, and air force personnel; prisoners of war; and brigadier generals.

In a book that has sparked discussions in homes, schools, and churches across America, Latty, along with acclaimed photographer Ron Tarver, captures not only what was unique about the experiences of more than two dozen veterans but also why it is important for these stories to be recorded. Whether it's the story of a black medic on Omaha Beach or a nurse who ferried wounded soldiers by heli-copter to medical centers throughout Asia during the Vietnam War, We Were There is a must-have for every black home, military enthusiast, and American patriot.