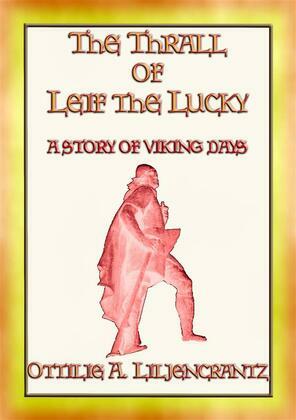 THE THRALL OF LEIF THE LUCKY - A Story of Viking Days

Leif Ericsson, also known as “LEIF THE LUCKY”, was the second son of Erik the Red and certainly displayed the Viking spirit of action, adventure and exploration. As a young man Leif Ericsson visited Norway, where he converted to Christianity. He was charged with returning to Greenland to convert the populace, but instead sailed further west and is believed to have landed somewhere in Nova Scotia. He spent a year in North America before returning home to Greenland, where he served as governor.

THE Anglo-Saxon race was in its boyhood in the days when the Vikings lived. For every heroic vice, the Vikings laid upon the opposite scale an heroic virtue. They plundered and robbed, but where they raided, they traded, as most men did in the times when “Might made Right.” Yet the heaven-sent instinct of hospitality was in the marrow of their bones. No beggar went from their doors without alms; no traveller asked in vain for shelter. As cunningly false as they were to their foes, just so superbly true were they to their friends. Above all, they were a race of conquerors, whose knee bent only to its proved superior. Their allegiance was not given to the man who was king-born, but to the man who showed himself their leader in courage and their master in skill.

The film The Viking (1928) was based on this novel, which has, to some extent, been based on Viking history.

10% of the publisher’s profit from the sale of this book will be donated to Charities.

OTTILIE A. LILJENCRANTZ (January 1876 – October 1910) was an American writer of Norse-themed historical novels.

Books by Liljencrantz included The Scrape That Jack Built (1897, a children's book), The Thrall of Leif the Lucky: A Story of Viking Days (1902, a novel about Leif Erikson), The Ward of King Canute (1903), The Vinland Champions (1904), Randvar the Songsmith: A Tale of Norumbega (1906, a novel with a werewolf theme), and A Viking's Love and Other Tales of the North (1911, a collection of short stories published posthumously). Troy Kinney and Margaret West Kinney illustrated three of Liljencrantz's books.