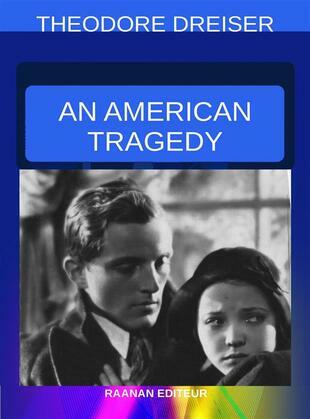 An American Tragedy is a 1925 novel by American writer Theodore Dreiser. He began the manuscript in the summer of 1920, but a year later abandoned most of that text. It was based on the notorious murder of Grace Brown in 1906 and the trial of her lover.

Ambitious, handsome, but poorly educated, naïve, and immature, Clyde Griffiths is raised by poor and devoutly religious parents to help in their street missionary work. As a young adult, Clyde must, to help support his family, take menial jobs as a soda jerk, then a bellhop at a prestigious Kansas City hotel. There, his more sophisticated colleagues introduce him to bouts of social drinking and sex with prostitutes.

Enjoying his new lifestyle, Clyde becomes infatuated with manipulative Hortense Briggs, who persuades him to buy her expensive gifts. When Clyde learns Hortense goes out with other men, he becomes jealous.

Clyde's life changes dramatically when his friend Sparser, driving Clyde, Hortense, and other friends back from a secluded rendezvous in the country in his boss's car, used without permission...