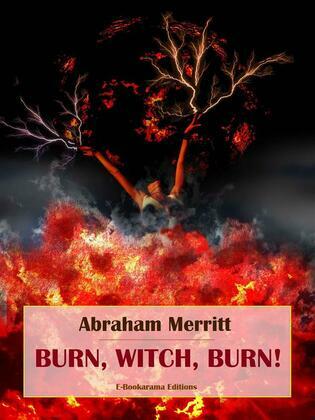 First published in 1932, "Burn, Witch, Burn!" was written toward the end of Abraham Merritt’s career and it is a fine example of pure gothic fantasy that uses the device of the superbeing as its chief interest.

A successful journalist, Merritt wrote fantasies of various types for relaxation in his hours away from his job. In early stories, such as "The Moon Pool" (1919) and "The Metal Monster" (1920), and in his last novel and sequel to "Burn, Witch, Burn!", "Creep, Shadow!" (1934), Merritt produced some of the best macabre fantasies by an American writer of any period.

In "Burn, Witch, Burn!", we meet Dr. Lowell, an eminent neurologist who becomes curious when a series of mysterious deaths comes to his attention. Men and women in the NYC area have been dying of no apparent cause, but with horrible grimaces on their faces and with very rapid onsets of rigor mortis. Lowell is aided in his investigation by Ricori, a mobster chieftain, as well as by Ricori’s very efficient gang. The trail of bizarre deaths leads to one Madame Mandilip and her doll shop, and before long the reader is immersed in a world of supernaturalism and escalating tension. Lowell, hard headed man of the 20th century, is hard put to explain the unfolding creepy events by the lights of his mundane science.