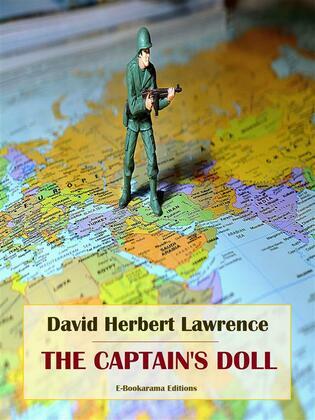 Written in 1921 and first published by Martin Secker in March 1923 in a volume with "The Ladybird" and "The Fox", "The Captain's Doll" is a short story or novella by the English author David Herbert Lawrence.

Set in Germany, after World War I, the story chronicles the journey of fallen German aristocrat Countess Johanna 'Hannele' zu Rassentlow as she dates Captain Alexander, a Scottish officer of unusual philosophy. The relationship develops into one of David Herbert Lawrence's idiosyncratic 'wicked triangles'.

The German protagonist makes dolls and is very good at doing so. She makes a doll of her Scottish friend, and one day, a British lady comes and wishes to buy it. The soldier’s wife.

The intimate relationship between Captain Alexander and Hannele is intruded upon when the captain's wife Evangeline travels to Germany suspicious of foul play....

"The Captain's Doll" was the basis of the 1983 TV film of the same name with Jeremy Irons as the Captain.