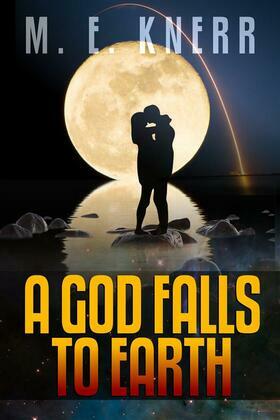 A God Falls to Earth

He left the mother ship and headed for Terra; he smiled at the instrument panel and watched the operation of the big scout ship as it rocketed toward the light ribbon of atmosphere that enveloped the planet. It was a joke, in a way. In a manner of speaking, he was the first Terran to fly an alien space ship, but he wasn’t thinking of that. He was thinking of the woman, Elizabeth Danson of Everett, Pennsylvania.

But trouble came early. The danger lights flickered in his eyes and the fear welled up within him like a flood. Fifteen hundred miles an hour and the scout ship was out of control! The behavior of the craft was erratic, as though a giant hand was slapping the silver belly as he plummeted toward the blue-green planet below.

In an agony of fear, he realized that he no longer was the master of the space ship - he was a prisoner in a violent, uncontrollable meteor. One that would finally slam him into infinity against the very Earth that was supposed to be his new home…

M.E. Knerr (sometimes Michel E. Knerr) didn't write a lot of books, but a lot of them were were for pretty low-rent publishers with short print runs so they're scarce and a little pricey. Not that I imagine people (other then me) are scrambling to buy these old paperbacks. Knerr wrote mostly about boats, space-sex, murder, dames and adventure. Also one about Sasquatch.

He held her until she had stopped crying, then he allowed himself to be led into the kitchen where she began applying iodine and bandaids to his scratched face. Weariness was again dragging at him like some clutching demon that threatened to drag him down into a bog of darkness. He studied her, trying to take his mind off his lethargy.

Beth Danson was about twenty-five and, besides her deep auburn-brown hair and lovely face, she boasted an equally attractive body. He found himself captivated by the warm thrust of her breasts beneath the silk blouse. The clear milk of her flesh, at the “V” of her throat excited him in a strange way.

When he thought of her as his wife, it was frightening. It was as though someone had tossed him a woman and expected him to just fall into the routine of marriage. It wouldn’t be hard to come to love this woman, but it would take awhile. Hell, he didn’t know her. She was a complete stranger who had suddenly told him they were married.

There was nothing familiar about her; even the fingers that were softly working over his face were alien.

Alien! That’s it! The whole damned world is alien, and I don’t know who I am, who I’ve been…

“Beth?” He asked suddenly, “how long have I been gone? You act as though it’s been a long while…”

“A long while, darling.”

She looked steadily at him for a moment, her eyes deep with seriousness. “Thirteen months,” she whispered, her voice shaking.

Thirteen months! He relaxed heavily in the straight backed chair and stared at her dumbfoundedly. Over a year! Where had he been? What had he done? Why hadn’t he been located before now?

“Thirteen months,” he croaked, unable to say anything else.

He rose to his feet slowly, his head starting to thump and thunder again, and took her into his arms. It was kind of difficult, trying to comfort her the way a husband should, but he tried.