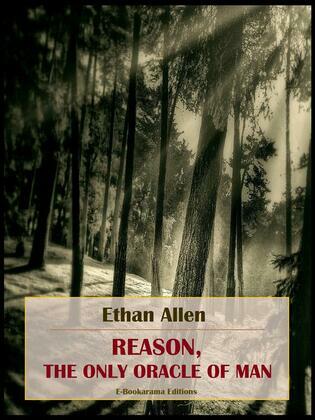 Reason, the Only Oracle of Man

First published in 1785, "Reason, the Only Oracle of Man" (AKA "A Compendious System of Natural Religion") is considered the first work critical of Christianity published in the New World, but is also considered a Deist work, and a freethought work as well. Given the fact that there was a limited run and a fire in the print shop where it was created, it is a wonder that it survived.

Ethan Allen, known more familiarly as a Revolutionary War hero and for having his name adopted by a furniture company, wrote this work with Dr. Thomas Young, a New York doctor who “mentored” Allen in philosophy and politics. Young was another Revolutionary War hero, participated in the Boston Tea Party, and was heavily involved with Colonial American politics and the establishment of state borders. Allen founded the Green Mountain Boys initially as a local militia to keep those with territorial claims out of what we know as Vermont today. (Young guided the state name of Vermont, supposedly as a tribute to the Green Mountain Boys.) Allen went on to lead the Green Mountain Boys in the war, and captured Fort Ticonderoga with them.

Allen and Young discussed natural philosophy and Deism in the 1760’s, and began writing this work around 1765. Several wars later, and territorial disputes mostly concluded, Allen went to Young’s widow (Young died in 1777) and retrieved the manuscript they had written so far. He rewrote some and completed it in 1785, publishing it privately in Bennington, Vermont. 1,500 copies were made, and only 200 were sold. A fire broke out and ruined many of the title. According to some, Haswell, the publisher, believed this a divine intervention, and the rest of the stock was burned. Others have argued it did not sell well, so Haswell decided to rid himself of the rest of the stock. Regardless, the only ones that remain from that first run are the ones that were initially sold.