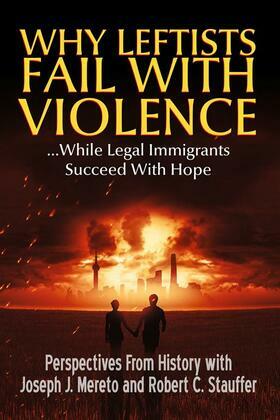 Why Leftists Fail with Violence

SOMEWHERE IN THE EBB OF THE GREAT CORONAVIRUS HOAX, when the Leftists rioted and destroyed huge sections of large metropolitan downtown areas, I worked to make sense of the world as it was reported in the “news” of that time.

Turning to history, I found books over a hundred years old that said things which could have been written today.

It came back to me that humanity hasn't changed much in our 10,000 years of recorded history – if at all.

And the phrase comes to mind: “Those who fail to study their own history are condemned to repeat it.”

Because the Leftists approach of a hundred years ago is still hard at work now destroying things in the very same pattern as they did then.

For that is their main reason for living – to destroy all that is constructed so they can seize power and remake the world according to their own warped view of things. The problem is that they are so devoted to learning and implementing destruction they have no background in building things. So the countries they take over become economic disasters. Russia, Venezuela, China, Cuba - and even the ancient cultures before Marx ever learned to write...

Check these chapter headings and you'll find the Leftists still attacking the same areas they were a hundred years ago:

- Patriotism ridiculed and despised by elites and celebrities

- Religion attacked and replaced with a worship of the state iself, with a large icon of its founder replacing those of any Deity.

- The country as a unique nation is negated and a globalist "one-world order" is preached.

- Reproduction of children is limited or forbidden in some cases. Ease of preventing childbirth is made readily available.

This is the opposite of the great bulk of humanity – who are trying to improve the world and make it a better place by helping everyone around them to succeed. They study and learn within the economic structure of a free society. The makers and shakers of these societies are the ones that build the businesses and create the jobs help people improve their lives and others around them.

In Leftist operations, the party owns all land and most of the businesses. There is no dependable rule of law. Individual rights and freedoms aren't defended - except for the few in power.

Leftists consider that these are their core truths. They will ultimately quote someone who quoted someone who read Marx at some point. And because they had a rough life and came through it with a chip on their shoulder, they consider that everyone else owes them – something.

This actually comes from a very cynical view of life, a negative mental attitude. Also known as pessimism. A very destructive pessimism.

People with a positive mindset see opportunity in disaster, they improve bad outcomes to prevent them from happening again.

People with a negative mindset are full of regrets and disappointments. They live in their past disasters. In fear of them, actually.

But that simply opens the door to solving the issue. Or at least being able to identify the disaster-prone walking among us...

The American Spirit in the Writings of Americans of Foreign Birth by Robert E. Stauffer