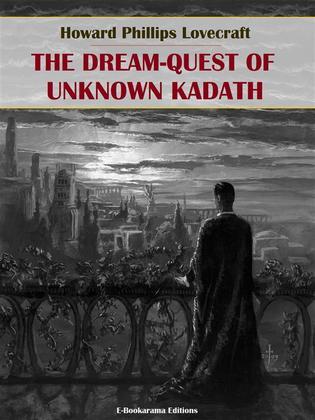 The Dream-Quest of Unknown Kadath

"The Dream-Quest of Unknown Kadath" is a novella by Howard Phillips Lovecraft published by Arkham House posthumously in 1943 in the collection Beyond the Wall of Sleep. Begun probably in the autumn of 1926, it was completed on January 22, 1927 and was unpublished in his lifetime.

"The Dream-Quest of Unknown Kadath" is both the longest of the stories that make up his Dream Cycle and the longest Lovecraft work to feature protagonist Randolph Carter. Along with his 1927 novel "The Case of Charles Dexter Ward", it can be considered one of the significant achievements of that period of Lovecraft's writing.

"The Dream-Quest of Unknown Kadath" combines elements of horror and fantasy into an epic tale that illustrates the scope and wonder of humankind's ability to dream.

Randolph Carter keeps dreaming of a beautiful unknown city which he is aching to visit. After begging the gods to show him the way and receiving no answer, he sets out on a dream-quest to find it. The priests tell him that nobody knows where the city is and that the journey will kill him, but Randolph Carter is not deterred. His quest takes him through fantastic and mostly dangerous places where he meets strange friends and enemies. All the while he can tell that the gods who don’t belong to Earth are trying to stop him from discovering Unknown Kadath.