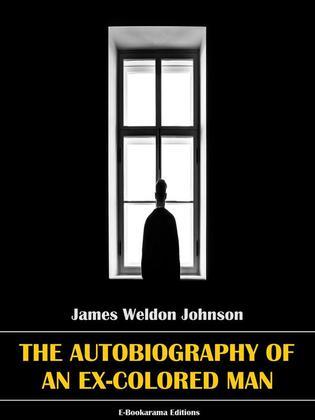 Originally published in 1912, "The Autobiography of an Ex-Colored Man", novel by James Weldon Johnson, is one of the jewels of the Harlem Renaissance.

This fictional autobiography, originally issued anonymously in 1912 in order to suggest authenticity, but also because Johnson feared for his diplomatic career, explores the intricacies of racial identity through the eventful life of its mixed-race (and unnamed) narrator. In 1927, it was re-released during the Harlem Renaissance under Johnson’s name and to critical praise.

The narrator, born in Georgia, tells of his childhood in Connecticut, where his mixed-race mother, aided by monthly checks from the boy’s white father, is able to provide a secure and cultured environment. Learning of his black heritage only by accident, the narrator experiences the first of several identity shifts that will eventually find him opting for membership in white society. A European interlude under the sponsorship of a wealthy white male companion raises the question of sexual identity as well, but the novel never makes this issue explicit. Throughout the work, Johnson employs characters, locales, incidents, and motifs from his own life, but the narrator is less a conscious self-portrait than a representation of the author’s own ambivalence.

The work critiques the US’s class system and probes the psychological reality and sociological impact of passing for white—one of the first works in US literature to do so. The narrator is never named and only refers to himself as the “ex-colored man,” which lends to themes of unfair social mobility, the psychological toll of racism, and guilt.

Though in some ways conforming to the conventional novel of passing in suggesting that a mixed racial heritage makes a person incapable of functioning in either the black or the white world, Johnson's novel turns this notion on its head by invoking double consciousness, as his narrator makes clear.