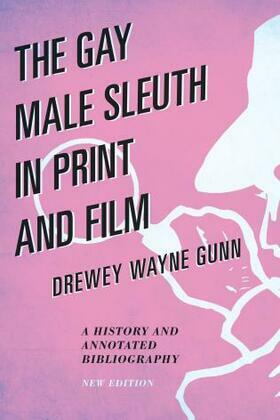 The Gay Male Sleuth in Print and Film

In The Gay Male Sleuth in Print and Film (2005), scholar Drewey Wayne Gunn examined the history of gay detectives beginning with the first recognized gay novel, The Heart in Exile, which appeared in 1953. In the years since the original edition's publication, hundreds of novels and short stories in this sub-genre have been produced, and Gunn has unearthed many additional representations previously unrecorded.

The Gay Male Sleuth in Print and Film: A History and Annotated Bibliography lists all printed works in English (including translations) presently known to include gay detectives (such as amateur sleuths, police detectives, private investigators, and investigative reporters), from the 1929 play Rope until the present day. It includes all films in English, subtitled or dubbed, from the screen version of Rope in 1948 and the launch of the independent film Spy on the Fly in 1966 through the end of 2011. Complete with two appendices—a bibliography of sources and a list of Lambda Literary Awards—and indexes of titles, detectives, and actors, this extensively revised and updated reference will prove invaluable to mystery collectors, researchers, aficionados of the subgenre, and those devoted to GLBTQ studies.