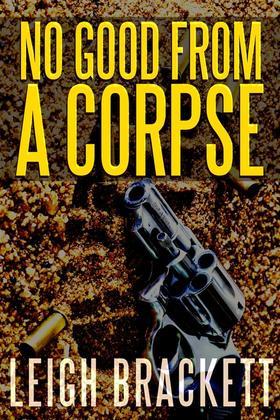 No Good From A Corpse

**A hardboiled crime novel in the vein of Raymond Chandler**

Laurel Dane was no angel. She’d changed men as often as she’d changed her hair color, and there was plenty in her past she’d like to forget. But no one deserved to be beaten to death, and private eye Ed Clive didn’t believe that her boyfriend had killed her. Pursuing her own lonely trail, he found out just how easily jealousy and twisted rage could turn a human being into a monster of violence.

Edmond Clive saw her almost as soon as he came into the tunnel from the San Francisco train. She was standing beyond the gate, watching for him, and somehow in all that seething press of uniforms and eager women, she was quite alone.

Clive smiled and tried to shove a little faster through the mob. Then her gray eyes found him. Suddenly there was no mob, no station, no noise, nothing. Nothing but the two of them, alone in a silent place with the look in Laurel Dane's gray eyes.

Clive's step slowed. He saw her smile. He answered and went on, but the lift was gone out of him.

She was wearing a white raincoat with the hood thrown back. There were raindrops caught in her soft black hair, but the drops in her thick lashes never came out of a Los Angeles sky. Her arms went around him tight.

He looked down at her. Cream-white skin, her face that had no beauty of feature and yet was beautiful because it was so alive and glowing, her red mouth, full and curved and a little sullen. He found it, as always, hard to breathe. He bent his head again.

They stood for a long time, the noise and the crowd flowing around them and leaving them untouched. Her lips were faintly bitter under his, with the taste of tears that had run down and caught in the corners of them.

They walked toward the door. She held his hand, like a child.

"No. And you're to go straight to the office. He's got a client waiting. A very expensive and very urgent client."

His wide, mischievous grin did a lot for his face. It was a sinewy, angular face that had known its way around for a long time, and there were those who said that Ed Clive could look tougher than the people he sent up. But his dark eyes were alert and friendly, his smile was nice, and most women decided he had a certain sinister fascination. They caught themselves wishing secretly that their own men didn't look quite so good....