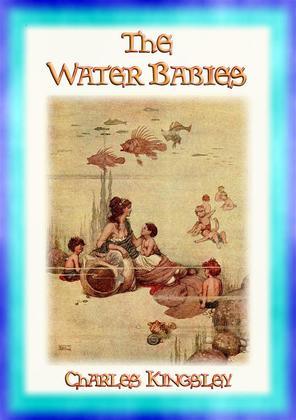 THE WATER BABIES - A Children's Classic

The Water-Babies, A Fairy Tale for a Land Baby is a children's novel by Charles Kingsley between 1862–63. It is written as part satire, satirising the events of the period.

The book’s protagonist is Tom, a young chimney sweep, who falls into a river after encountering an upper-class girl named Ellie and being chased out of her house. There he appears to drown and is transformed into a "water-baby", as he is told by a caddisfly—an insect that sheds its skin—and begins his moral education.

Tom embarks on a series of adventures and lessons, and enjoys the community of other water-babies on Saint Brendan's Island once he proves himself a moral creature. The major spiritual leaders in his new world are the fairies Mrs. Doasyouwouldbedoneby (a reference to the Golden Rule), Mrs. Bedonebyasyoudid, and Mother Carey. Weekly, Tom is allowed the company of Ellie, who eventually becomes a water-baby as well.

Grimes, his old master, drowns as well, and in his final adventure, Tom travels to the end of the world to attempt to help the man where he is being punished for his misdeeds. Tom helps Grimes to find repentance, and Grimes will be given a second chance if he can successfully perform a final penance. By proving his willingness to do things he does not like, if they are the right things to do, Tom earns himself a return to human form, and becomes "a great man of science" who "can plan railways, design steam-engines, electric telegraphs, rifled guns, and so forth". He and Ellie are united, although the book states (perhaps jokingly) that they never marry, claiming that in fairy tales, no one beneath the rank of prince and princess ever marries.

The book ends with the caveat that it is only a fairy tale, and the reader is to believe none of it, "even if it is true."

Initially published in serial form Macmillan's Magazine, it was first published in its entirety in 1863. The story is thematically concerned with Christian redemption, though Kingsley also uses the book to argue that England treats its poor badly, and to question child labour, among other themes.