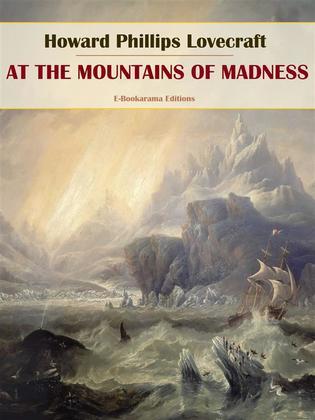 At the Mountains of Madness

First published in 1936, but originally composed in 1931, Howard Phillips Lovecraft’s novella "At the Mountains of Madness" is one of his most famous and successful stories, with numerous overt connections to his other works.

H. P. Lovecraft’s most effective novel begins as a tale of exploration at the cutting edge of science. Airplanes and drilling devices are shipped to Antarctica in 1930, just as the mapping of the continent begins in earnest. But this "awful place," more ancient than any other continent, is not so easily opened up to materialist exploitation. Soon enough, an entirely new history of the world is in evidence, one that undermines all previously held views of science and nature, a vision that contains vast alien cities buried beneath the ice and the awesome and awful survivors of its heyday.

The positive and efficient first-person narrative of the geologist, Dr. William Dyer, patiently and didactically explains the wonders of new technology. Only when the first survey group, isolated by a storm, begins to radio back of highly unusual finds in a cavern beneath the surface, do events begin to unravel. From then on, Dyer and his companion, the student Danforth, are on a downward spiral of discovery that attacks every notion of time, space, and life, until Danforth’s speech is reduced to disconnected fragments, recalled only in dreams.

Deeply influenced by Poe, Lovecraft’s horror tends to be implied and offstage, but this effectively deepens the abounding philosophical horror felt by the protagonists. This intriguing blend of gothic horror and lost-world scenarios within a more modern genre framework can be rediscovered in many contemporary narratives, especially film. Lovecraft achieved little success in his lifetime but his work resonates with themes that consistently inspire later generations of writers, science fiction as much as horror. Largely due to his Cthulhu stories, called Cthulhu Mythos by August Derleth, Lovecraft is today the subject of a large cult following.