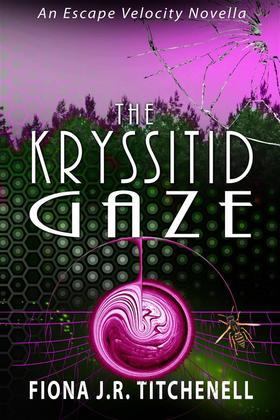 Once upon a time, on the second planet from Apocrytus, there was a monster whose face men trembled to behold…

Or they would, if they knew who she was. Perhaps she should leave more survivors.

Meligora lives for revenge, but it’s not as dreary as she thought it would be. Her old life ended when the Brotherhood took control of her planet and started rounding up women for mandatory “conversion,” removing their stingers, wings, and most of their eyes, looting their bodies for their valuable reproductive organs, and leaving them docile shells of their former selves. But after her own botched procedure turned her into a lethal weapon instead of a slave, she learned to make the best of things, bending Brotherhood enforcers to her will and slaughtering them in droves each night.

She knows it’s only a matter of time before someone tries to stop her, but when a young Human bounty hunter finally follows her trail of corpses, he offers her a choice: stay a wanted killer of dime-a-dozen thugs, or join him in tracking down the man who mutilated her.

Welcome to Escape Velocity: Feminist Folktales from Beyond the Stars. This reimagining of the legend of Medusa, along with other patriarchy-smashing Escape Velocity novellas, can be enjoyed independently or in any order.