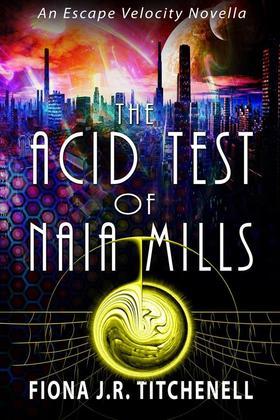 The Acid Test of Naia Mills

Once upon a time, on a glamorous space station called Eris, there was a young woman who could spin base metals into gold…

At least, that’s what she tells people to separate them from their money.

Naia Mills is a con artist, a Human orphan scraping to get by in a galaxy that doesn’t want her, more than a century after her ancestors rendered the Earth uninhabitable. She travels the stars selling fake gold jewelry and elixirs, until the day she unknowingly swindles the son of a space station commander. Now confined to the station and threatened with a slow death in a radioactive penal colony, Naia has three days to buy her way to freedom with an impossible act of alchemy.

Eager to get out from under his father’s thumb, and fascinated with Naia’s profession, the commander’s son is an easy dupe and willing accomplice, but to get their hands on the gold they both need to escape, they’ll have to make a deal with the local mob, and a queenpin so powerful and private that even her closest associates don’t know her name.

Welcome to Escape Velocity: Feminist Folktales from Beyond the Stars. This reimagining of “Rumpelstiltskin,” along with other Escape Velocity novellas about complicated fairytale women in space, can be enjoyed independently or in any order.