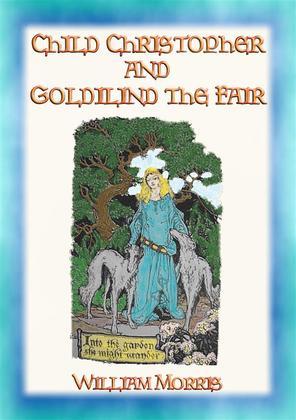 CHILD CHRISTOPHER AND GOLDILIND THE FAIR - A classic Romance

Child Christopher and Goldilind the Fair is a fantasy novel by William Morris, perhaps the first modern fantasy writer to unite an imaginary world with an element of the supernatural, and thus the precursor of much of present-day fantasy literature. It was first published in hardcover by Morris' Kelmscott Press in 1895.

The novel, with its development of a royal character unaware of their true status, had an influence on C.S. Lewis’ Prince Caspian in the Narnia series.

Set in the forested land of Oakenrealm, it was Morris' reimagining and recasting of the medieval Lay of Havelock the Dane with the displaced royal heirs Christopher and Goldilind standing in for the original story's Havelock and Goldborough.

However, unlike the original, Morris puts more emphasis on the romantic side of the story giving a prominent place to the heroine's misfortunes and bringing to the forefront the love story between her and the hero; the warfare by which the hero regains his heritage is relegated to a secondary role. Also unlike both the source and most of Morris's other fantasies, there is little or no supernatural element in this version of the story.

Christopher is initially ignorant of his true identity, leading to an emotional conflict between the protagonists to reconcile their mutual love and attraction with what they believe to be the profound disparity in their social status and shame of their forced marriage. This situation is resolved when the two fall in with Jack of the Tofts, who gives refuge to Christopher after his sons rescue the hero from an assassination attempt by a servant of the usurper Earl Rolf.

Jack informs Christopher of his true station and gathers together an army to help him challenge the usurper. When the hosts meet, the commander of Rolf's forces, Baron Gandolf of Brimside, challenges Jack to single combat, but Christopher claims the honor from Jack and proves his worth by defeating the opposing champion.

10% of the profit from the sale of this book will be donated to charity.