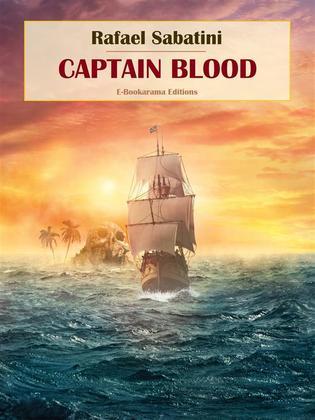 First published in 1922, "Captain Blood"  is a classic novel of adventure and romance, and one of Italian-English writer Rafael Sabatini's best.

Peter Blood, an Irish physician and soldier in England in the 1680's, is wrongly convicted of treason and sentenced to indentured slavery in the Caribbean. He escapes and becomes the most feared pirate captain on the Spanish Main, but all the glory of his adventures cannot help him, for the woman he loves cannot love a thief and pirate. Even when he destroys England's enemies, even at his most triumphant...

A rollicking tale of piracy on a grand scale, accented with breath-taking maritime manoeuvres, near misses, and broadside hits, Sabatini’s fast-paced novel is alive with colour, romance, and excitement. A swashbuckling classic that brims with stolen treasure and adventure on the high seas, Captain Blood quickly became a best-seller soon after it was first published.

"Captain Blood" is also the first book of a world famous trilogy about Peter Blood's adventures.