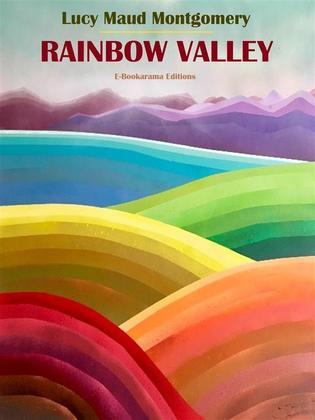 First published in 1919, "Rainbow Valley" is the seventh book in the chronology of the Anne of Green Gables series by Lucy Maud Montgomery, although it was the fifth book published.

Unlike the first six, where Anne Shirley was the main protagonist, this book centres on Anne and Gilbert's children (Jem, Walter, Nan and Di mainly) and their friends, the four Meredith children (Jerry, Faith, Una and Carl) as well as a runaway named Mary Vance.

Anne Shirley is grown up, has married her beloved Gilbert, and is the mother of six mischievous children. These boys and girls discover a special place all their own, but they never dream of what will will happen when a strange family moves into an old mansion nearby. The Meredith clan is two boys and two girls---and a runaway named Mary Vance. Soon the Merediths join Anne's children in their private hideout, intent on carrying out their plans to save Mary from the orphanage, to help the lonely minister find happiness, and to keep a pet rooster from the soup pot. There's always an adventure brewing in the sun-dappled world of Rainbow Valley.