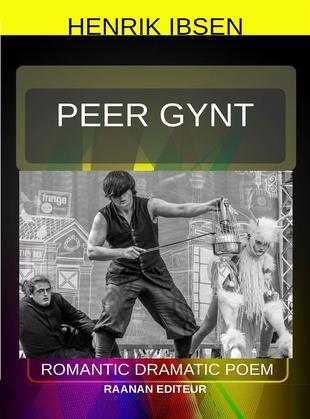 Peer Gynt is a five-act play in verse by the Norwegian dramatist Henrik Ibsen published in 1867. Written in Danish—the common written language of Denmark and Norway in Ibsen's lifetime—it is one of the most widely performed Norwegian plays. Ibsen believed Per Gynt, the Norwegian fairy tale on which the play is loosely based, to be rooted in fact, and several of the characters are modelled after Ibsen's own family, notably his parents Knud Ibsen and Marichen Altenburg. He was also generally inspired by Peter Christen Asbjørnsen's collection of Norwegian fairy tales, published in 1845.

Peer Gynt chronicles the journey of its titular character from the Norwegian mountains to the North African desert. According to Klaus Van Den Berg, "its origins are romantic, but the play also anticipates the fragmentations of emerging modernism" and the "cinematic script blends poetry with social satire and realistic scenes with surreal ones." Peer Gynt has also been described as the story of a life based on procrastination and avoidance.