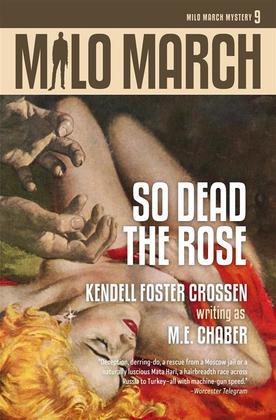 Milo March, back in uniform again, does his bit for the CIA in a quest for a paper stolen from the highest government files—a job that the government can trust only to him. Milo, relying only on his wits and seemingly unlimited American dollars, travels from Paris to East Berlin and then to Moscow. He drugs a Russian delegate at a trade congress in East Berlin and trusses him up like a chicken in order to assume his identity and attend a reception party where he comes face to face with Premier Khrushchev himself. He lures a beautiful brunette who is an important Russian spy into a date by posing as a shy comrade who just happens to have a collection of her favorite American jazz records. As if that weren’t enough chutzpah, he then steals the private limo of a high Russian official and, after changing identities again, leads the secret police on an insanely dangerous goose chase. Fortified by vodka-fueled courage and the thrill of risk-taking, Milo stirs up enough trouble to make even the Kremlin see red, not to mention his own government. And before the conclusion of this tense and exciting adventure, he even endangers the entire mission to protect an enemy out of loyalty to that special breed of humans who are secret agents.